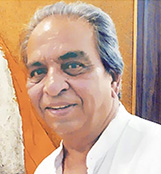 Born in Bombay in 1946, Shamshad Husain did his diploma in Painting from the College of Fine Arts, Baroda, and post-graduation from the Royal College of art, London. Shamshad won the National Award in 1983, and worked off a Government of India Fellowship during 1983-85. Since he passed out of the College of Fine Art in Baroda in 1968 till the year 1987, Shamshad had about 28 solo shows of his paintings and graphics in Hyderabad, Bombay, Delhi, Baroda, Madras, Bangalore, Copenhagen, London, Hoffhiem in Germany, and Geneva. Between 1964 and 1988, Shamshad participated in numerous national and international group shows and art festivals including the III and IV Triennale International 1975 and 1983, Perth Festival, Australia 1977, Asian Youth Festival, London 1980, Inaugural Exhibition, Bharat Bhavan, Bhopal 1982, Tokyo Biennale 1984, Asian Art, Fukuoka Museum, Japan 1985, Traveling Print Exhibition, USA 1985-86, Asian Biennale, Dhaka 1986, Ankara Biennale, Turkey 1986, Biennale 1 & 11, Bhopal 1986, 1988 and the Festival of India, USSR 1987 and 1988. The commissioned murals and sculptures executed by him are two murals in Jaipur and Delhi 1969-1970, monumental sculpture of a scientist in Hyderabad 1981, sculpture in fiber glass and a relief in metal in Delhi 1986, and another metal relief in Mussoorie 1988. He is also eminent artist M.F. Husain's son. Shamshad's works can be found in several private and corporate collections.