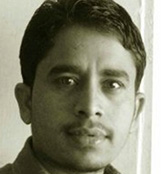 He has won several awards:
He received the Governor of Maharashtra Award and Medal in 2007; he won the K.K. Hebber Art Foundation Award and the Monsoon Show award in 2006; he won the Silver Medal from Sir J. J. School of Art, Mumbai from 2003-2005.

He has won several awards:
Best watercolor, P. A. Dhond Award from Sir. J. J. School of Art in 2006; best watercolor from Raza Foundation Award, award for best watercoluor from Art Society of India at Jehangir Art Gallery, Mumbai in 2003 and best watercolour award from S.C.Z.C. in Nagpur in 2002.

Manohar lives and works in Mumbai.