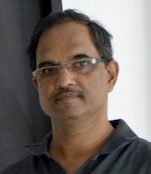 Yashwant Deshmukh was born in 1963 in Akola, Maharashtra.

In 1988 he received his degree of Bachelor of Fine Arts from Sir J. J. School of Art, Mumbai.

Yashwant lives and works in Mumbai.