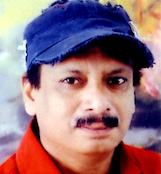 Sudhir Talmale was born in 1964 in Nagpur.

He completed his Masters degree in Fine Arts from Nagpur University.