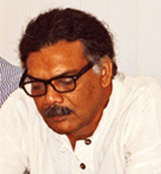 Chhatrapati Dutta was born in 1964 in Kolkata.

In 1987 he completed his Bachelor in Visual Arts form the Government College of Art & Craft, Kolkata. In 1988 he did his post-graduation from University of Athens, Greece. He completed his Masters in Fine Arts from Kala Bhavana, Santiniketan. Soon Dutta mastered the art of painting on the reverse side.

He lives in Kolkata.