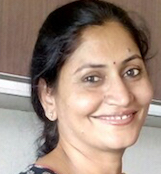 Sanju Jain was born in 1979 in Aari, Madhya Pradesh.

In 1990 she received her Masters Degree in Painting from Indore.