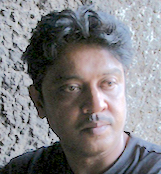 Ranadip Mukherjee was born in 1968 in Jharkhand.

In 1992 he graduated from Government College of Art & Craft, Kolkata.