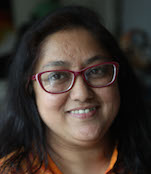 She has won several awards:
In 2001 she received the Achiever of the Week award from Mid-Day in Pune. In 2002 she won the Junior Fellowship by Govt. of India for Visual Art. In 2003 she won the National academy award for Flow of Death (After Godhara), one of the fabric assemblage, instituted by Lalit Kala Akademi, New Delhi at the 45th National Exhibition of Art at Guwahati.

Vaishali lives and works in Pune.