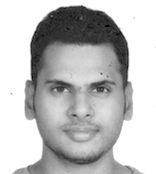 Yogesh Ramkrishna Kamble was born in 1991 in Latur.

Yogesh has participated in several art camps:
In 2012 he attended an art camp for the designing of the book Balbharti in Pune. In 2013 he attended the National Camp by CAVA School of Art. In 2014 he participated in the Lalit Kala National Lithograph Camp in Baroda. In 2014 - 2015 he took part in the Futur Foundation Workshop at Sir J. J. School of Art, Mumbai. In 2016 he participated in Jazpur workshop Residency for Printmaking, Vadodara and took part in Khoj Peers Share Programme in Delhi. In 2016 he received the Kanoria Centre of Arts fellowship in Graphics, Ahmedabad.

He has received several awards:
In 2014 he won the Vinus award, Pune and the C. V. M. Award for best Lithograph Print. In 2015 he won the Monsoon Show Award for best Graphic in Pune. In 2016 he won the Future Foundation Award, Switzerland; Bombay Art Society, Mumbai and the Purushottum Annual Merit Award for Graphic Printmaking in Mumbai.

He lives and works in Baroda.