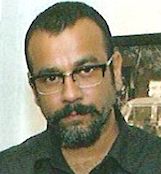 Shahid Datawala was born in 1974 in Mumbai.

He won several awards:
In 2009 he was awarded the Edida Furniture Category Award and in 2010 he received the Edida Designer of the Year by Elle Décor. He was also the chief designer for Palette for 7 years, a furniture design store in Mumbai. He is currently working on his next solo exhibition and a series of photography book projects on various aspect of Mumbai. He designs clothes and is a jewellery maker. He has photographed extensively for various publications.