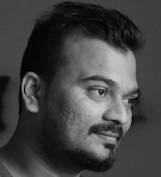 Siddharth Shingade was born in 1983 in Latur, Maharashtra.

In 2008 he had a solo show, Anitya at Gallery One at Gurgaon.

Siddharth lives and works in Maharashtra.