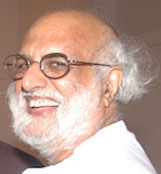 Gurcharan Singh was born in 1949 at Patiala, Punjab.

He studied at Government College of Arts and Crafts, Chandigarh.