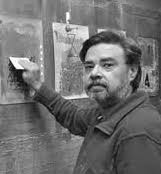 S Harshavardhana was born in New Delhi in 1958.

He is a Post Graduate in a Biosciences from Birla Institute of Science & Technology, Pilani and has a Diploma in Business Management.

Harshavardhana is a self-taught artist.

In 2004 he participated in a two-person exhibition with Manish Pushkale at Bodhi Art, Singapore and in 2006 with Sheetal Gattani at Galerie Muller and Plate in Berlin.

He has participated in several group exhibitions: