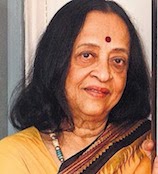 1940
Anjolie Ela Menon was born in Burnpur, West Bengal in 1940. She studied Literature at New Delhi before studying at the J J School of Art in Bombay which she left midway to study in Europe. She studied on a scholarship at Atelier Fresque, Ecole Nationale des Beaux-Art, Paris from 1959-61.

From 1959 to 2013, Anjolie has had several solo shows in Mumbai, New York, Hong Kong, New Delhi, Karnataka, Palo Alto and in London. In 2017 Anjolie had a solo show titled Anjolie Ela Menon: A Retrospective at Aicon Gallery, New York.

From the year 1980 to 2014, she took part in several group shows in New York, Hong Kong, San Francisco, New Delhi, Mumbai and Bangalore.

She has participated in a number of exhibitions such as, ‘Kalpana: Figurative Art in India’, presented by the Indian Council for Cultural Relations (ICCR) at Aicon Gallery, London, in 2009; ‘Mapping Memories – 2, Painted Travelogues of Bali and Burma’ at Gallery Threshold, New Delhi, in 2008; and ‘Kitsch Kitsch Hota Hai’ at India Habitat Centre, New Delhi, in 2001.

In 2000, she received the Padma Shri from the Government of India.