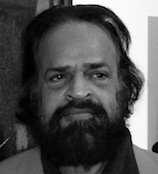 Achuthan Kudallur was born in 1945 in Kerala.

He is a self-taught artist with a degree in Civil Engineering.

He was a part of Madras Art Club, which functioned within the Government College of Art, Chennai. Later he shifted to painting abstracts while he was in search of a better medium for self-expression.

He lives and works in Chennai.