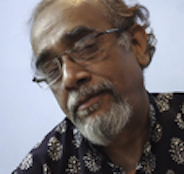 Aditya Basak was born in 1953 in Kolkata.

In 1977 he received his degree in Fine Arts from Government College of Art and Craft, Kolkata.

In 1975 he won a scholarship to study at the Government College of Art and Crafts, Kolkata. In 1986 he received Senior Fellowship (Visual Art) from the Ministry of Human Resources Development, Government of India and he won the State Government Award in Kolkata and a National Award in New Delhi.

He lives and works in New Delhi.